Changing the image of MPV in India, the Honda Mobilio Review 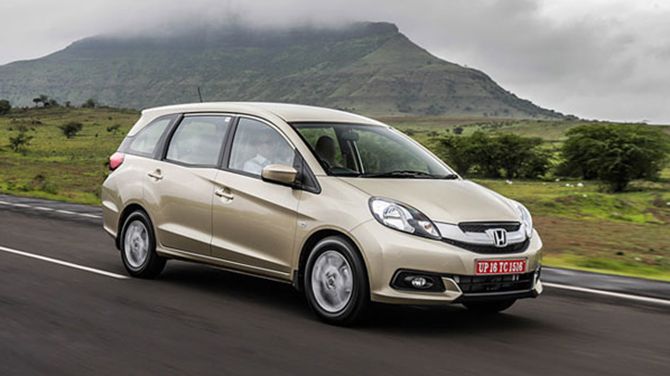 After tasting success with the Amaze and the all new City, Honda has rolled out the Honda Mobilio in India to further bolster its growth. We at autoX review the car extensively to see how it compares with market leader Toyota Innova, Maruti Suzuki’s Ertiga and the latest entry in the segment - the Renault Lodgy.

MPVs have traditionally performed terribly in India, primarily due to their taxi-image. Honda is well aware of this fact and has managed to produce a car that is stylish enough to appease a large-size family.

Speaking of design, the front of the Honda Mobilio is predominated by a large single grille that extends till the LED projector lamp. The sides of the car feature two visible shoulder and bottom lines, while another short line brings up the rear. A peculiar kink can also be found in the window line.

The rear of the car also gives a pleasing look, an area of styling where traditional MPVs have struggled at. A fine example of a car with a poor looking rear end is the Renault Lodgy.

The interiors of the Honda Mobilio bear sharp resemblance to the Amaze, which left us craving for more. The main addition are the rear AC vents which are mounted on the roof and have independent controls.

However, the MPV is comfortable enough to accommodate seven people, while leaving enough space in the boot. The rear seats can be folded to make room for extra baggage, something that would come handy on long trips.

The extra space has been made possible by extending the wheelbase of the Amaze - the car Mobilio is based on - by 247 mm, while the car itself is now 4.4 m in length.

On the power unit front, one can choose between a 1.5-litre petrol engine and a diesel engine of the equal displacement. The latter is likely to be the main driving force for Honda and produces 99 bhp of power - which seems just adequate for this MPV. The only complaint we have is the engine noise which continues to remain high, despite concerted efforts from the Japanese car maker.

The Honda Mobilio handles well and the suspension seems well setup. The power steering wheel, however, feels lifeless and suggests its not a driver's car. But then, it is not supposed to be one.

Overall, the Honda Mobilio ticks most of the boxes and would go someway in changing the image of MPVs in India. It is priced competitively and has Honda’s logo on its grille - both sufficient enough to drive sales numbers.