How the IoT became a giant saviour in leakage detection? 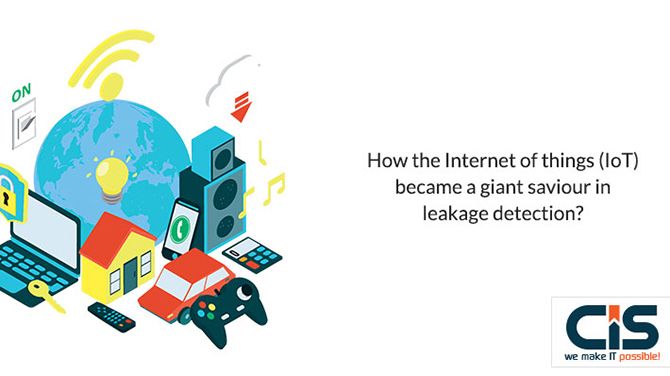 Leakages in the Oil and Gas Sector is a crucial problem which can have disastrous effects. In order to mitigate this problem which the industry is facing, companies all over the world have invested in more human capital and operational hardware. However, the outcomes aren’t optimal enough. What actually is required is a shift towards infrastructure, which is data-driven and begins with Information Value Loop by means of investing in both sensors and cloud. Hence, the Internet of Things solutions has a huge role in this industry. So, let’s discuss how the Internet of Things (IoT) is becoming a giant saviour when it comes to leakage detection

Industrial IoT or IIOT, also known as Industry 4.0, appears to be the bright future of the entire industrial revolution, which was initiated with the introduction of first, the steam power, then followed by usage of electric energy. At present, numerous industries are now opting for Industrial IoT and also quite leveraging their current resources.

An end-to-end IIoT solution saves quite a lot of money for the companies by offering instant notification in case of pipeline leakage. Through the faster address of the problem, such solutions help in preventing oil or gas seeping further into the entire region and environment where it can easily have a hugely significant impact on water, plants, and wildlife. Also, the real-time alert system easily detects the leakage and even addresses them quite immediately that saves a lot of money, oil and certainly the environment. The entire information gathered through the sensors is sent to a cluster cloud. Now, the assimilation of real-time data along with the latest technology, companies can predict highly accurate data and can even send alerts quite early. Whenever a leak alert is duly received, the company can easily take immediate precaution and actions to make sure that the entire damage is easily mitigated.

IoT essentially leverages the great combination of sensor technology used for monitoring gas flow, pressure, compressor conditions, concentration, temperature and a variety of variables inside a given pipeline. Now, as the leaks start from a particular pin-sized hole, it can easily be detected through IoT sensors. For instance, a smart pig, that is sent inside a pipeline, detects any cracks on the sides as well as welding effects utilizing ultrasounds waves along with magnetic flux features.

Also, detection of gas leaks can be achieved through utilizing infrared through video cameras which have a special filter that is sensitive to particular selected wavelengths of infrared. Even hydrocarbons absorb any infrared radiation from these transmitted infrared wavelengths which make it possible to easily detect any leaks as a smoke image on the video display. However, there is another brilliant way to monitor leakage, that is through fibre optic cables, that is essentially based on the various physical changes that occur at the particular leak site. Also, one such particular change is an actual variation in the entire temperature profile. In this case, the fibre optic cable is duly placed right alongside the pipeline in order to sense and detect any variation.

Read the Article:- 5 Internet Of Things Trends Everyone Should Know About

Although, this particular method can certainly be possible only to use with limited pipeline lengths since numerous reflections are needed to design an effective and useful temperature profile that actually detect gas leaks. In order to keep a constant observation, progressive web apps can be used to provide mobile monitoring unit by accumulating and displaying IoT sensor data and sending alerts. Hence, progressive web app development can play a crucial role in providing the necessary tools to monitor leakage.

A pipeline monitoring system assists to know even about any sort of minute or minuscule leakage which occurs within a given pipeline. In the case of invisible vapours, it indicates leaks which are easily and efficiently detected by IoT sensors along with real-time sensors that ensure the safety of Oil and Gas operations. Also, by means of tracking every meter of the entire pipeline, particular alerts are transmitted immediately to the company’s control toom, and then alerts are sent to the pipeline supervisors, accordingly.

3) Ingestion of Real-time Status of Equipment

This industry is quite dependent on the consistent as well as effective operations of their pipelines as well as other equipment. Hence, excess of any vibrations or even unmonitored pressure can easily cause huge catastrophic damage and losses. IoT sensors implemented by an IoT app development company assist in monitoring the motors, pumps, and compressors in the entire oil and gas supply. Even the sensors assist in the detection of the dynamic pressure along with pulses and temperature, while the sensors present in the engine detect any emissions. Thus, it assists in avoiding massive losses.

It is important for them to go for IoT app development company which can take care of integration with present enterprise software along with hardware management. A huge benefit which the IoT provides to Oil and Gas companies is essentially a two-way communication which allows the companies to control the pumps as well as other controllers. Hence, in this way, IoT has become a giant saviour in leakage detection in the Oil and Gas industry.