What you should visit in Bucharest? 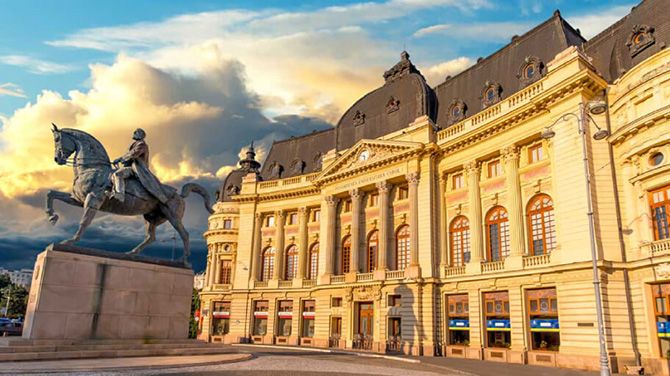 The largest city in Romania and the capital of the country, is located in the south-east of Romania, in the plain area. Bucharest has a special status and is not part of any of the 41 counties of the country, being independent. If you are from Bucharest or are visiting the capital, here is a list of 10 places you should not miss. And if you decide to stay in the city for as many days as possible, you will need accommodation so you can find offers on the Accommodation.info website.

The Parliament Palace (with Izvor Park)

We begin the foray into the beauties of the capital with a world record for the largest administrative building in the world. It was built in the time of Communist President Nicolae Ceausescu and has 9 levels. Izvor Park, located near the People's House, is an oasis of relaxation and perfect for walking or jogging.

Herastrau Park is one of the largest parks in Bucharest. It is located in the north of the capital and is over 80 years old. It has been declared an important archaeological historical monument because on the shore of the homonymous lake was discovered a civil settlement (dwellings) from the Paleolithic era. Inside the park, however, there are protected trees such as Tagore's oak, planted to celebrate the 100th anniversary of the birth of Rabindranath Tagore, an Indian philosopher or cherry tree donated by the Emperor of Japan. Also here is a variety of Japanese acacia with weeping branches and blemished leaves, which was first described by Romanian researchers and called Sophora Japonica Bucharest.

One of the boundaries of Herastrau Park and an important artery in the capital, the Kiseleff Road runs along several historical monuments that are worth seeing. The Romanian Peasant Museum, the Geology Museum and the Grigore Antipa Museum of Geology are all found along the road, but we can also visit the namesake park. The road joins Victoriei Square with the Arc de Triomphe.

This museum contains over 2 million pieces, not all of which are on display. However, it contains osteological (bone), zoological, mineralogical, geological, paleontological and ethnographic collections, in addition to books, sketches and other important documents. It can be a good opportunity to combine fun and education for the little ones, but also for the big ones.

It is actually called the Serban Vodă Cemetery, the name of Bellu comes from Baron Barbu Bellu, the one who donated the land to the City Council. If you think about what can be beautiful in a cemetery, I answer that the numerous artistic funerary monuments that make the cemetery inscribed on the list of historical monuments in Bucharest. There is a section of the cemetery, the Artists' Alley, on which are buried the great artists of Romania such as Mihai Eminescu, Ion Luca Caragiale, George Bacovia, Toma Caragiu, Henri Coandă, Nicolae Labiș, Lia Manoliu, Titu Maiorescu, Amza Pellea, Maria Tanase and many others. The cemetery is visited especially on the night of the museums.

The "Delta among the blocks" located in Bucharest became the first urban national park in Romania. Recently, the access to the observatory in the park has been reopened, from where the species of birds and animals that settled in the park can be admired. The area came to public attention after National Geographic magazine published an article highlighting the fact that non-human intervention led to the formation of a new habitat for endangered species. In Văcărești, various rodents, but also predators such as moth and fox have been discovered.

These are some of the places you can visit in Bucharest. We are sure that if you choose a few tours in Romania you will be fascinated by many spectacular places.